In 1991, when Rohrbach Brewing became one of the first craft breweries in Rochester, New York, they were part of that pioneer generation whose mission was to change the American beer industry.

Like many of that generation, founder John Urlaub was inspired by the beer cultures of the UK and Germany (hence the name). He created beers like Highland Lager and Scotch Ale to introduce his customers to new vistas of flavor.

As craft has become a national phenomenon, Rohrbach has had to learn to change with the industry they helped form. That means growth, of course, and new recipes, but it also means reinventing the place their classic beers hold in the larger culture. Whereas the old message was, “Try this beer: it has big flavor,” the new message is, “Try this beer, it’s very drinkable.”

Small but Strong
That kind of brand flexibility and fluidity appeals to McDermott. He started with Rohrbach in the late 90s, then left to work at a larger brewery for six years before coming back for the new position as well as the culture of a smaller brewery.The culture John Urlaub has created arguably comes from his taking a European approach not only to brewing but to growth, making small, sustainable steps and being very careful not to become overleveraged.

McDermott explains that Urlaub’s approach to fiscal management has always been about retaining as much control over their operations as possible. When you are in a position of financial strength, you have more freedom about what beers to produce and how to run your business. Fiscal responsibility and investment in their community has led to their becoming a local fixture. Their Scotch Ale is not only their best-selling beer but a part of the Rochester lifestyle. “We have a whole generation of people coming in saying they ‘grew up’ drinking Scotch Ale,” says McDermott. That’s a great legacy, but Rohrbach is aware of craft consumers’ obsession with novelty. When you’re not the newest or youngest in town, it can put pressure on you to stay “relevant.” Hence the playful recipes in what they call their Neoteric Series, from a word meaning “one who is modern or advocates new ideas.”

A Brewhouse Designed for Their Beers
As fate would have it, a friend introduced them to a young marketer with a business plan for . . . a brewery! Nick Reistad was once a professional cyclist, racing all over the world. He tried to make a career in advertising, but it didn’t take long to decide his heart wasn’t in it. What he really wanted to do was run a brewery. He had run his first business plan past his friend Kevin Brandenburg, who had started two successful tech companies. “It would be fair to say he laughed me off his back porch,” Nick recalls. But when he showed Brandenburg the revision, Brandenburg said, “You’ve got to meet these two doctors I know.” That was in September 2014, and in September 2015 the four partners opened the doors of Raised Grain Brewing Co. with a seven-barrel brewhouse. The name is a play on the woodworking technique that helps bring out the natural beauty of woodgrain, as well as the act of raising and toasting a glass of fermented grain.

So they did the CBC thing. “We visited almost every manufacturer there,” McDermott recalls. It was a ProBrew partner, Vance Metal Fabricators, who are themselves located only a few towns east of Rochester in Geneva, who pointed Rohrbach to the ProBrew team. McDermott happened to know one of the ProBrew engineers, but Rohrbach still did their due diligence and vetted all of their candidates. There were a few reasons McDermott got excited about ProBrew.

ProBrew Does It All . . . And More
“We wanted a domestic supplier; that was really important to us. And we had a lot of technical things we were looking for,” he explains. He was impressed with many of the team members’ backgrounds with larger breweries, and he could feel how excited ProBrew was to work with a brewery like theirs. “At the time we started talking, they didn’t have a lot of systems in breweries of our size, yet, but we knew they had the skills.” Rohrbach liked the idea of being an early adopter of brewhouse technology that impressed them.

The ProBrew team impressed Reistad with what he called their “engineered” approach: “We know what we want to do, and we know how we want to do it, and we have specific processes in mind, but there’s not necessarily equipment that does what we want to do. So, we’ll talk to Peter [Schultz] and his team, and they’ll come up with a solution, and they have the abilities to execute what we’re envisioning.” Kelley adds “They have a real, ‘If it doesn’t exist, we’ll build it’ mentality and they think of things on their own, like the inline dosing of our chemicals [CIP]. You think you’re doing things efficiently, but then they come along with some new ideas.” Efficient, indeed. Working closely with the ProBrew team, the whole project came together in only a few months. Reistad even credits ProBrew with handling a lot of the project management that goes into building a brewery.

Rohrbach quickly felt vindicated in their choice. ProBrew proved both willing and able to customize their existing design to suit Rohrbach’s specific needs. “They really worked with us on being able to pick and choose what was important to us, and that was really different than what we saw at the trade show,” McDermott says.
ProBrew offers a fully-automated brewhouse, but Rohrbach opted for fewer automation features so they could get other features while staying within their budget. This included, for instance, repiping the clean-in-place (CIP) system to work with other vessels. ProBrew also included some cellar automation features with an eye to future growth.

McDermott said they also opted for less automation because the brewing staff liked the idea of maintaining some level of manual operation. It was what they came up on, and they wanted to be able to train new recruits on a system that had some manual components. ProBrew’s automation controls provided them the flexibility to opt in and out of the features they wanted.

Rohrbach ordered a 20 barrel, three-vessel, semi-automated brewhouse from ProBrew. The tanks, it turned out, would be built at Vance Metal, and Rohrbach appreciated not only being able to source them from within the U.S. but right down the road in New York.
Then came a key moment. Rohrbach was replacing their main production line, meaning once they shut it down they would be unable to make beer until the new one was running (enough beer to serve their accounts, that is; the 7-bbl system at their brewpub would not be adequate). They scheduled a two-week block of down-time for the transition, then hoped everything would go right.

Any brewery owner knows that things never go entirely right, but McDermott says the problems they had were the kind you’d expect from a project of that size. As far as working with ProBrew, the important thing, for him, was that ProBrew was on time with the manufacturing and delivery. “They were there when we needed them to be; it was a challenge they were up to. That was clutch.” 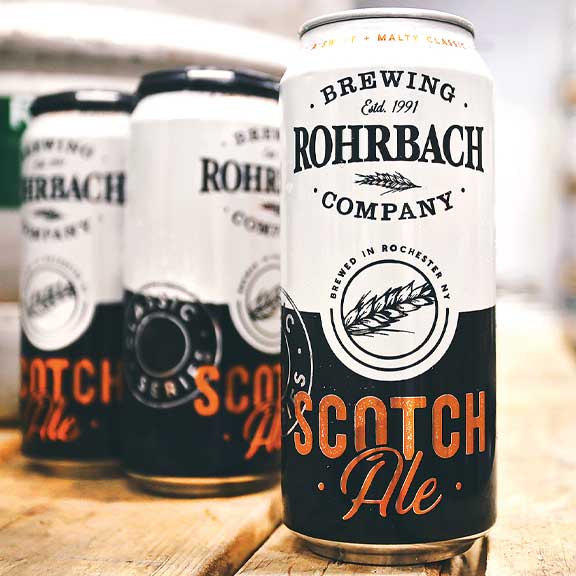 Reinventing Rohrbach
After a little over one year of operation, McDermott says their system is great. “We’re getting bigger yields, better batches, more consistency, and more control. For me, it’s not just about the bigger and faster, but about getting that control and quality.”

They spent some time “dialing it in,” he says, tweaking things to get them where they want them. ProBrew was “clutch” here, too, according to McDermott. “Things come up that you don’t expect, and they always worked with us, even after the fact – and pretty speedily.”
He says where the old system could only handle one brew per shift, they can now run three brews across two shifts and still see greater efficiency.

The rapid increase in production capacity is a welcome if somewhat jarring change for this brewery that has enjoyed slowly carving out its space in their upstate market, and it has gotten Rohrbach reinventing their growth strategy and rethinking other parts of their business.

“We have to figure out how to change the rest of the operation to keep up,” McDermott explains. Rohrbach has already ordered a new ProBrew 7bbl brewhouse to replace the original system from 1991. Before its installation in Rochester, Rohrbach’s new pilot system will be on display at ProBrew’s CBC booth #9085 in Denver.

McDermott describes the existing brewhouse as “the Frankenstein system; it’s all cobbled together.” They love it, of course: “Over the years, a lot of brewers have gone through it and made a lot of good beer, but it’s very primitive and very manual and pieced-together.”
Having worked with the larger ProBrew system, he’s excited to replace the brewpub system, too.
“We trust ProBrew, and having a new system where everything is dialed in and sized correctly … we get to make choices and get what we want. It gives us more control. We can correct what’s been bugging us about the old system, and it frees the brewer up a bit.”

McDermott says they have what they call “dude valves” on the current system, manual valves “where some dude just has to stand there working it.”
The brewpub is where a lot of experimentation happens, so having some ProBrew automation in the new system, as well as increased yields and quicker speeds, means their brewer “can think more about the beer and less about the equipment.”

And, he adds, “Maybe at the end of the day he can kick back and enjoy a pint rather than have to fix something.”