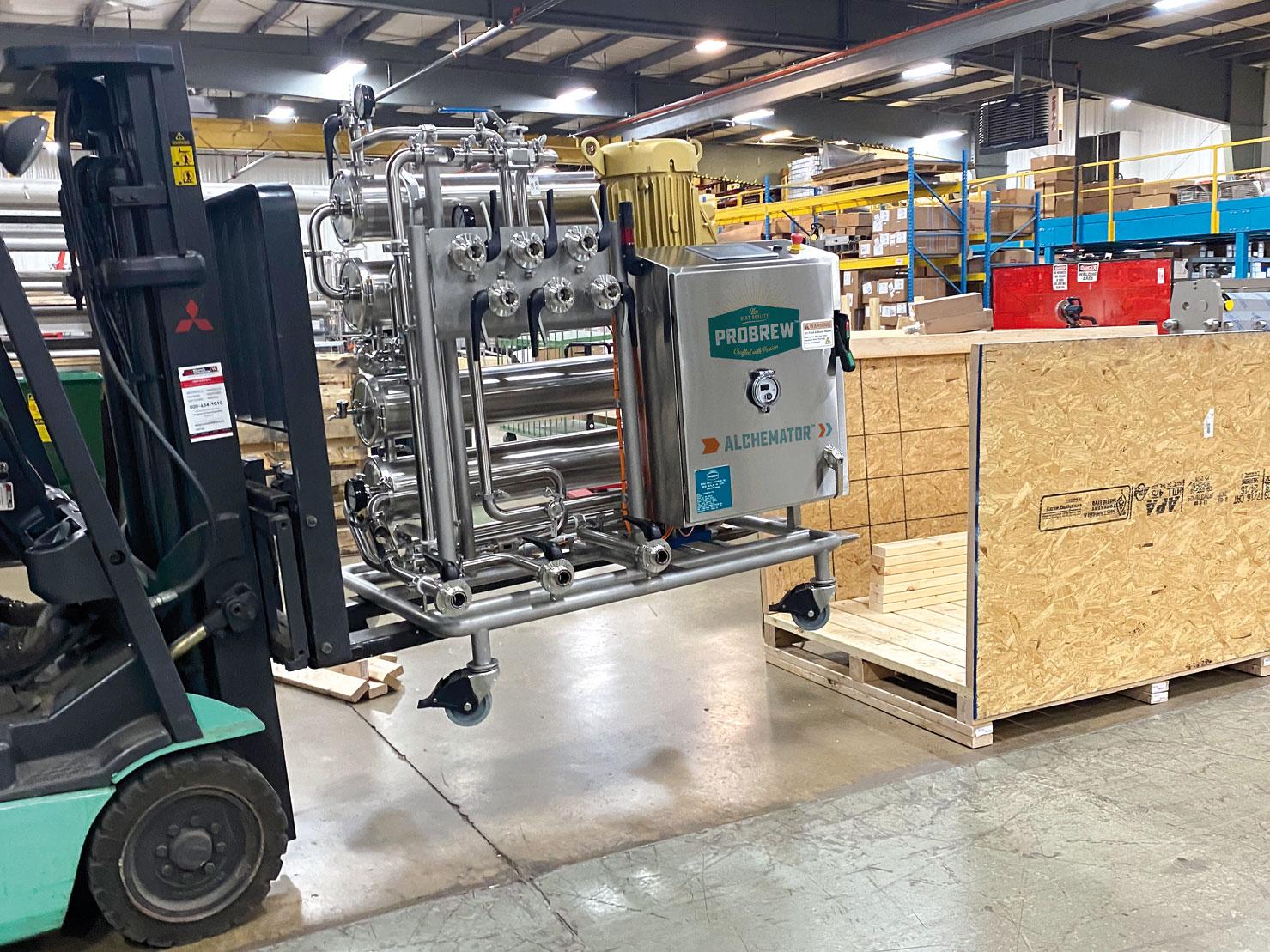 Justin McKellar, general manager of Equals Brewing in London, Ontario, purchased an Alchemator after beginning his search for an non-alcoholic (NA) beer solution over a year ago: “I’m excited about making a great tasting NA beer with the Alchemator. This is going to allow us to take our recipes and make them even better.”

Hard Seltzer: Welcoming to Everybody
“If you’d asked me five years ago, as we were writing the business plan, if we were going to be brewing a clear hard seltzer, I would have laughed and told you about some IPA we wanted to do,” Reistad admits (and we know he’s not alone). But breweries are businesses, and businesses have to think about their customers.

“We want to be welcoming to everybody that chooses to come in [to our taproom], but not everybody drinks beer, and that’s just the reality,” Reistad explains. “Now, we’re embracing it and using it as an opportunity to reach more people with our brand.”

ProBrew and Raised Grain have had a symbiotic relationship for years, now, and ProBrew approached them with the Alchemator in the summer of 2019 to see if they could work together on developing and perfecting the technology.

Raised Grain had already been exploring hard seltzers and jumped at the opportunity. They had experience with ProBrew’s quality and reliability, and they liked that they could start with a beer rather than playing around with simple syrups

Reistad says they wanted to play it by the book vis-à-vis the TTB and their license: “We brew it as a beer; based on the TTB’s definition we have to use a small amount of hops. But the process we use [i.e., the Alchemator’s membrane filtration technology] results in a completely clear base that’s devoid of flavor.”

With the Alchemator, the biggest problem they faced was fine-tuning their flavors. “You have to have the right combinations,” Reistad says. “We had tasting panels and brought in people, both seltzer drinkers and non-seltzer drinkers.”
They launched their seltzers in four flavors: cherry-lime, mango, mandarin orange, and key lime. “The best were simple flavors rather than complex combinations,” Reistad notes.

NA Beers: Adapting to Consumer Tastes
Equals Brewing is a contract brewer and co-packer with a unique emphasis on customer partnerships. In other words, they don’t just fulfill orders. As McKellar puts it, “We support our partners right from the innovation stage all the way through to getting it delivered to the retailer. We believe that a true partnership comes from us wanting your business to be successful.”

In addition to expertise, support, and their lab, Equals offers small brewers a means of achieving quality and consistency at scale: they run a 35 hL brewhouse and an industrial-scale canning line. In their first 18 months of operation, Equals worked with over 30 brewery partners on over 75 recipes.

As consumer tastes have changed, Equals’s partners have requested a greater variety of beverage capabilities, and Equals has responded by branching out into alcoholic ciders, ready to drink (RTD) cocktails, and, now, NA beers. “The issue we’ve found is that the quality of beers in the [NA] segment is pretty low outside of the mainstream lager,” McKellar reports. He set out to answer a specific question: “How do you make beer that doesn’t have that asterisk behind it—‘Oh, that tastes good … for an NA beer’?”

McKellar didn’t like what he saw in thermal alcohol separators; the use of heat tends to change the taste of the final product for the worse. Not only that, but adding a vacuum distillation unit would have implications for his entire line, particularly in his heating and cooling capacity.

He learned about membrane separation from a fellow brewer and liked the product he tried, then discovered ProBrew’s Alchemator in his research.

McKellar was savvy enough to look past ProBrew’s own marketing, which targeted the hard seltzer market; he knew how the machine worked and that it would produce a substrate for creating high-quality, flavorful NA beers: “Most people want the permeate [the alcohol and water that permeates the membrane],” he says, “where I actually want the retentate [the concentrated beer that bypasses the membrane].”

The Alchemator uses membrane separation technology. Liquid is pumped through what is essentially a filter which only alcohol and water molecules can pass through. As ProBrew president Derek Deubel tells it, they had already been expanding into craft cider, kombucha, coffee, and CBD-infused beverages when they began to explore NA beers. “We found an expired patent with this membrane technology and thought, ‘Why don’t we use this as a basis for developing and innovating our own thing?’” he says.

ProBrew mechanical process engineer Joe Kulakowski describes the main challenge as selecting the right pore size in the membrane. “You want to optimize flow rate of alcohol and water out without allowing anything else to pass through,” he says. “You also want more pressure and more flow without beating up the beer too much.”

When they ran an early prototype and realized they were getting crystal-clear hard seltzer in addition to their concentrated beer, Deubel knew they were on to something.“If we can sell our customers one machine that can produce two products, then that’s a big win for everyone,” Deubel says. “The big thing we’ve noticed from the membrane is it doesn’t heat up the beer,” Kulakowski emphasizes. “You maintain a lot more of the beer flavor through this method.”

The hard seltzer base produced by the Alchemator can be flavored as well as have additional carbonation added to it, whereas the concentrated beer (the retentate) can be repurposed for use in distilling or making NA beers. ProBrew developed the DA-5 and the DA-10 Reconstitution/Water Deaeration systems, which can be paired with the Alchemator, for this latter purpose. The DA-5 (5 gallons per minute) and the DA-10 (10 gallons per minute) deaerates the water to keep DO levels low in the reconstituted NA beer.

What about other alcoholic beverages? Kulakowski says that in their tests with wine, ciders, and kombucha, each has worked to produce hard water on one end and a concentrated NA base on the other. Different beverages do require adjustments to the flow rate, however. 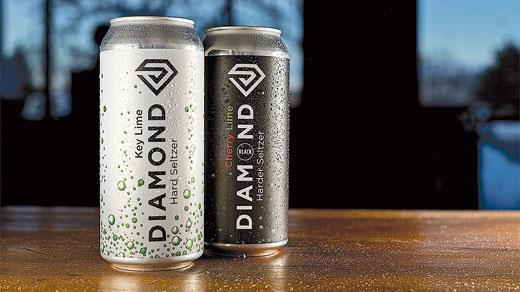 Less than one year into the Alchemator’s release, breweries are feeling free to explore their options. Raised Grain will put their seltzers into 16 oz. cans to fit them alongside their beer offerings. They’re also going for ABVs closer to beer, with their Diamond Hard Seltzer at 5% and their Black Diamond at 7.5%.

As a co-packer, Equals works to meet their customer-partners’ goals, whether that’s 12 oz., sleek, or 16 oz. cans. Their main focus is on creating a quality product. “There are a lot of people joining the market,” McKellar notes, “and as people try [NA beers] and it’s not good, they get turned off. We found the membrane method gave us the best chance at creating the best NA craft beer with a great flavor that won’t have that asterisk beside it.”
In other words, the Alchemator has been good news for people making NA beers and hard seltzers. As Reistad puts it, the Alchemator “allowed us to take the product that we’re comfortable brewing and separate it out and have just the clean seltzer base that we want—and then it’s a blank canvas.”

“We’re only scratching the surface of what the Alchemator can do,” says Deubel, “and it’s really our customers that are showing us the possibilities. We’re very excited to see what people make with this machine.”