Jackalope Brewing (Nashville, Tenn.) spent their first two years building their brand as a draft-only brewery. They knew they would need to package at some point, but they were waiting for the right time.

That came in 2013, when all the necessary pieces came together – the most important of which was finding a mobile canner to work with. Their Thunder Ann American Pale Ale was not only Jackalope’s first beer to appear in cans, it was the first canned craft beer in all of Nashville.

Granted, at the time it was not nearly so large a pool as it has become, but Jackalope also has a history of doing its own thing. The brewery – named after the mythical chimera formed by putting antelope antlers on a jackrabbit – was, at its start, something of a mythical creation itself: a female-owned brewery.

Jackalope anticipate nearly 8,000 barrels in 2019, and the system can produce as much as 24,000 barrels annually. The jump in capacity meant they could think more seriously about purchasing their own packaging line – in fact, it was in conversations with Jackalope that Derek Deubel, President of ProBrew, was inspired to develop the Demobilize campaign that has helped several other breweries move from mobile canning to self-canning.

When It’s Time to Demobilize
Wright is quick to point out that mobile canning worked for them for a while. They had a good relationship with their mobile canner, and it served a valuable role in their business model early on.
At some point, however, a growing brewery is going to feel pinched enough to move to demobilize. For Jackalope, it was about cost and convenience. “Mobile canning cost more because it wasn’t our line,” Wright explains. “And increasingly it became an issue of scheduling. We were subject to the mobile canner for scheduling.”

This was a particular problem if they had to push a canning date. Jackalope beers are unfiltered, and unfiltered beer does not clear according to deadlines. “We’ve had to cancel canning dates before,” says Wright, and then they were subject to the canner’s availability for rescheduling, which meant lost days of freshness or missed brew cycles.They discovered ProBrew at CBC several years ago at a time when they were not yet ready to pull the trigger. Part of that was a space issue, so when they found the Ranch property on Houston Street, things changed.

“Once we had the space and had grander growth plans, that became the tipping point for us,” says Wright. Part of those plans included reaching their loyal customers in more places. “We’d built the company on draft, but what about those customers that don’t go out to the bars that much but love Jackalope? We’re able to go out to the masses now and feed demand as well as go into new markets.”Wright and Spaulding actually came up to Wisconsin to check out ProBrew, and saw the equipment at Raised Grain Brewing in Waukesha. As reported in ProBrew News in spring of 2018, Raised Grain has become an unofficial showroom of ProBrew’s complete line of brewhouse, cellaring, and packaging equipment. 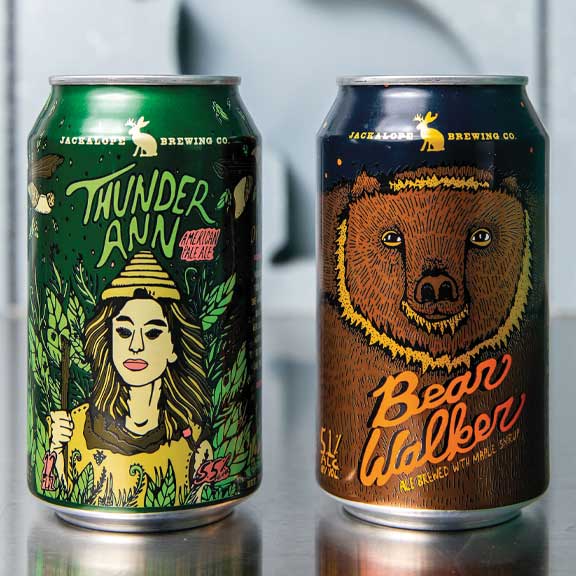 Wright liked what he saw, and he especially liked the low DO levels they were getting from the ProFill 90S: “That was something we really wanted. When you have a good line that gives you those low DO levels, you can feel better about the stability and shelf life and send the beer farther without having to worry about it staying fresh for the consumer.”
The ProFill 90S was also priced right, and they liked Derek and the rest of the team they met. “Everyone was genuine,” says Wright, “and for us … we don’t know everything about everything, so trust is such an important part of it.”

As Fast As We Can Handle It
The ProFill has done better than hold up its end for Jackalope. While there were some hiccups at the start, Wright was impressed with the level of service: “They were working really hard on it, and they got it right.”

Now that the system is up and running and Jackalope’s brewers have worked out their preferred settings, the ProFill is zipping along. “We’re seeing really great [DO] numbers and good speed. It goes as fast as we can handle, I’ll say that.”That extra capacity means expanding to new markets. Jackalope hopes to start distributing to the rest of the state in the near future. They have also been experimenting in markets farther afield. Jackalope and local chicken restaurant Hattie B’s have teamed up for a Nashville- themed restaurant at the Cosmopolitan Hotel in Las Vegas.

All in all, the new brewery and their ProFill 90S have meant greater control and convenience at a lower cost and with more opportunities to reach more customers. And that, after all, is the demobilize dream.