Shane Passwaters, Director of Operations at Central Waters Brewing, estimates about 40% of their 16,000 annual barrels of beer goes into an oak barrel for aging. Those 6,000 or so barrels go into kegs, bombers, or four packs of 12-oz. bottles, and though Central Waters has a shiny new canning line, they will probably always bottle their barrel-aged beers. They just feel that material best fits those award-winning beers.

But their Illumination DIPA or their Unsettled NEIPA? Those they wanted to put into cans. Passwaters, along with owners Paul Graham and Anello Mollica and the rest of the core team, had been watching the market shift toward greater adoption of cans. Then they saw the opportunities cans presented in new markets such as stadiums and golf clubs.

“I love hoppy beer, and I’d rather see some of those beers in cans,” said Passwaters. It was time to look at adding a canning line to their operation, but Central Waters took its time deciding which line.

“We shopped around for a couple years at CBC and looked at a lot of options,” he says. At the end of that extensive search process, they chose ProBrew’s ProFill 90S Canning Line. As with most breweries, “cost was one issue,” he notes, and ProBrew had a solution that met their quality standards and fit within their budget. Design was another issue. Passwaters is a one-man maintenance crew, taking care of equipment across the whole brewery. He wanted equipment that he could service for the most part on his own.

“I liked the simplicity of the mechanical valves [of the ProFill] over some of the things the Germans were doing with canning lines,” he cites as an example. In addition, he likes the usability of the controls interface. “It was considerably easier to train our operator on than our bottle filler [had been].”

Many ProBrew customers express appreciation for the high degree of customer service, and though Passwaters usually takes first crack at any problems on his own, he echoes the common refrain: “Tech support has been fantastic! We had a solenoid that went bad, and they had a guy up here within a day to install a brand new one. If they didn’t know an answer to a question, they went and found it out right away.”

For him, ProBrew’s level of service goes beyond just a working relationship. “It’s like a friendship thing, really,” he says. “I have all their personal numbers, and they answer whenever I call. I talked to one guy who helped me over the phone while he was working on another brewery account of theirs down in Mexico.”

Integration Beyond Engineering
The ProFill 90S fits into Central Waters’ operations at both the engineering and value levels. That is, they not only connected the machine to their production line (of course), but they worked with ProBrew to integrate their conveyor and drying system into the automated controls. This means the conveyor and dryer automatically turn on and off as needed, preventing backup problems as well as saving energy.

The ProFill includes an onboard lubrication system, but Passwaters had his own system he wanted to use. It was a system he had already used on his bottling line, and he liked the results he was getting; it was what he was familiar with. ProBrew couldn’t guarantee this system, so Passwaters was on his own. However, that did not concern him; it was part of what he liked about the ProFill: he can work on it without being a computer programmer.That said, Passwaters likes the ease and simplicity of their Allen-Bradley PLC touchscreen control. It marks a big step up from the complicated layouts of physical buttons on some of their other machines.

At the level of values, the ProFill 90S, with its customized automations, runs efficiently, which is a big value for Central Waters. They have been a leading brewery in Wisconsin’s statewide green initiatives. They source ingredients and materials from companies using sustainable or renewable processes. They preheat their water with solar power, and at one time about 75% of their total power was solar. They founded a malt and barley coop to support small farmers.

A machine like the ProFill, with its small footprint, its efficient operation, and the integrated automation up and down the line means minimal power consumption in minimal space. It means no expensive build-outs and no wasted time running machines that aren’t needed. 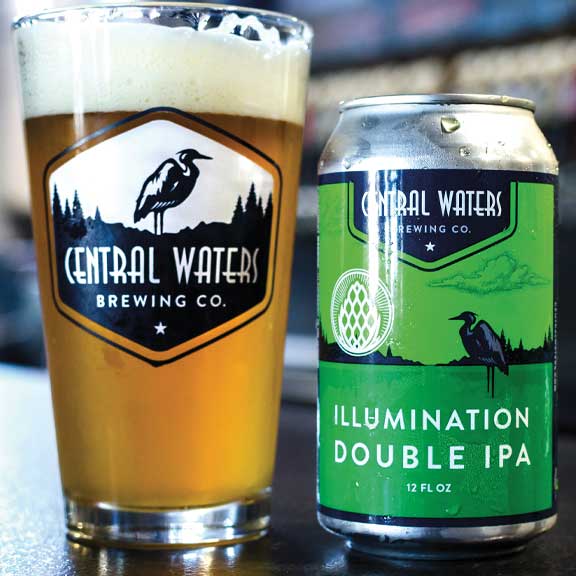 A Workhorse
Passwaters says they found their sweet spot running the ProFill at around 85 cans per minute. Nearly hitting the 90 cpm it’s designed for, at 85 cpm they are seeing dissolved oxygen levels around 30 parts per billion (“which is Budweiser levels!” Passwater adds). He says they’ve turned it up as high as 105 cpm for 12 oz. cans, (“just messing around with it”).

“It’s a workhorse, you know?” says Passwaters, noting that they have still yet to really get their canning program in full gear. They have already seen great consumer interest, though. Cans sell out within a day in the tap room and within the week on retail shelves. They got a contract to sell their DIPA and NEIPA in cans to Lambeau field about halfway through the 2018 season, and they went through nearly 180 cases. They also ran a promotion for a Breast Cancer Awareness Month that involved a special release called Hope is Brewing Raspberry Mango Kettle Sour, sold in deep pink-labeled cans.

Central Waters was pleasantly surprised to find that going into cans has allowed them to add new placements at existing retailers so that both their bottles and cans can be found on the same shelves in some stores.The early canning trials have been so successful that this year they plan to put three of their seven flagships into both cans and bottles in six- and twelve-packs. Passwaters figures they’ll hit between six and seven thousand cases of canned beer.“For us, this was a good stepping stone,” he says, “and there’s a good chance that if this works out we’ll switch up to a bigger line, probably with the ProBrew ProFill 200.”